Sun glare is responsible for just a few hundred auto accidents every year, according to the National Highway Traffic Safety Administration (NHTSA). The AAA, on the other hand, argues that sun glare is a contributing factor to thousands of accidents annually. Either way, there’s no denying that the GPS navigation system in your car on a sunny day significantly increases your chances of being involved in an accident. But are these systems combined with the sun really to blame for numerous auto accidents on America’s roads each year? 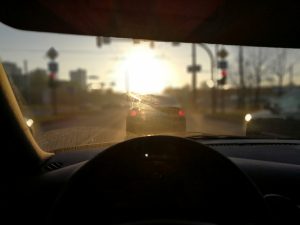 An under-reported type of accident

Despite respected organizations failing to agree on how many sun glare-related accidents occur in the U.S. every year, figures from the UK reveal that British drivers experience almost 3,000 auto accidents annually due to sun glare. As the UK’s population is around four times smaller than America’s, it’s safe to say that sun glare is a much bigger problem in the U.S. than official figures show. In-car GPS navigation systems are fueling this accident rate and will continue to do so if drivers don’t act now to prevent the problem. This is because the nation is growing increasingly reliant on in-car display systems, which can also include GPS navigation systems, as is confirmed by the prediction that GPS navigation sales will grow by more than 8% by 2023.

It’s not just the screens on GPS navigation systems that have resulted in the number of auto accidents in America increasing in recent years. More than 50% of motorists say that sun glare is worsened by large vehicles such as SUVs and RVs. But you can combat this by choosing smaller versions of these vehicles – for example, the B class RV over the A class. It’s also best to avoid RVs that are prone to safety recalls as these models tend to shy away from any type of anti-glare features on the windscreen or wing mirrors, so they’re more dangerous for both you and other drivers. Once you’re comfortable with your choice of vehicle, further anti-glare features, such as the NuShield anti-glare screen protector for GPS navigation displays should be added to your in-car gadgets.

Is sun glare really that bad?

When the sun’s rays shine onto a smooth, flat surface like a GPS navigation screen, it instantly bounces off it in a different direction. In a vehicle, the risk is that the glare can obliterate the clarity of the display. When the driver looks to check the display it could become a distraction and can force the driver to swerve off the road or not pay attention to traffic ahead. Too often, accidents of this kind are officially recorded as being due to ‘distracted driving’, especially if the driver confesses to using their GPS navigation system at the time. The Centers for Disease Control & Prevention (CDC) reports that there are nine fatalities and more than 1,000 injuries every day due to distracted driving. But in reality, many of these accidents will be due to drivers having their vision impaired when the sun suddenly strikes the screen of their GPS navigation system, which further highlights the need to utilize anti-glare screen protector films.

The NuShield Triple A anti-glare film is designed to eliminate reflective glare from the surface of the display and allow the driver to easily read the display with just a short glance.

For drivers who wear polarized sunglasses, drive convertibles or their glare issues is mainly due to sunlight coming through a sun or moon roof NuShield offers the DayVue anti-reflective screen protector film.

Both films are easy to install and they come precut to the size of your display. NuShield currently has measurements for most cars manufactured between 2008 and 2020 and we constantly add more sizes to our database. If your model is not on our list, just provide us with the width and height measurement of your display and NuShield will find a film to fit your device. For more information, click here.