Filmmaking has been revolutionized by computerization and modern techniques. In the beginning the director relied on a cinematographer to capture the scene and then waiting around for the film to be processed and see the result. Then if not correct they had to reshoot the scene and wait around again. This took a very long time and lots of money for the actors and production people to make movies.

Today, there is a television monitor hooked up to the camera so the director can see in 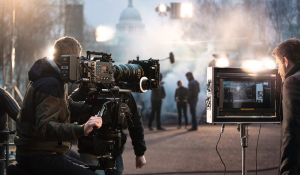 real-time what is being captured on film. If there is a problem, the scene can be reshot immediately at minimal cost. But when the scenes are outdoors it becomes hard to see the monitor screen when the sun is glaring.

And this is where NuShield comes in. The DayVue anti-reflective film eliminates the glare and because it has 99% clarity the image is not distorted. Because the film has a circular polarization effect the image is still visible when the director and other viewers wear polarized sunglasses.

NuShield works with film equipment rental companies to equip monitors for the production of both movies and television. The NuShield DayVue film was even placed on a television monitor used in a scene to eliminate glare where the actors had to reference and discuss the image on the monitor.

When display visibility is important users rely on the NuShield DayVue screen protector. The film is used by boaters, flyers, drivers and field technicians. The film is easy to install and is available in sizes to fit devices from Smartphones up to large television monitors.
NuShield currently offers thousands of film sizes. You can order yours here.