The 2019 NASCAR Season begins February 10th with the highly competitive Advance Auto Parts Clash at the Daytona Speedway and will have a star-studded lineup of drivers. 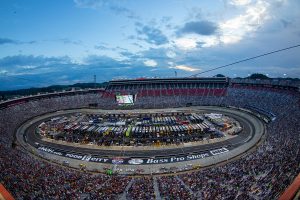 This will be the fourth year that the Stewart-Haas team will be using the NuShield Triple A anti-glare screen protector film to eliminate glare from the McClaren Digital Race Dash instrument panel. Just like drivers like you, they need to maintain a clear view of the road and their digital instrument panel. They also fight sun glare coming in from the side windows and reflecting onto the panel. When you are driving in excess of 170 mph you only have time to quickly glance at the display.

The NuShield Triple A antiglare film also helps to eliminate glare from the track lights during night races. But they work most effectively when the races start during the day and finish at night. That is because as the sun sets the incoming light hits the panel directly. The anti-glare coating of the Triple A film eliminates reflected glare and the mirror-like reflections given off by the display. If you have seen a race on television sometimes the in-car cameras show how bad the reflection is for drivers that don’t use the NuShield film on their displays.

We at NuShield wish the Stewart-Haas team drivers Kevin Harvick, Aric Almirola, Clint Bowyer and Daniel Suarez who will be driving in the Cup Series and Cole Custer and Chase Briscoe who are driving in the Xfinity Series good luck on the track during the 2019 year season. Last year they made a formidable team and had many wins and top 10 finishes.

But you don’t need to be a race car driver to enjoy the NuShield Triple A film. Many car owners install this film on their own GPS display to cut down glare. The NuShield film is compatible with most cars made since 2000 and the film comes pre-cut to fit depending on the make, model and year of the car. For drivers who wear polarized sunglasses while driving, the NuShield DayVue film type is the right solution.

Order your NuShield film on our website or contact us if you don’t see your car model or year listed.