According to leading ophthalmologists and a recent report from GigaOm’s technology research platform, long-term exposure to blue light after dark can lead to chronic insomnia, and even breast cancer. This blue light however is only given off by devices using Light Emitting Diode (LED). These would include computer monitors, tablets, flat-screen TVs (such as those manufactured by Samsung, Sony, and LG), and OLED TVs with curved screens, including Panasonic, Samsung, and LG. 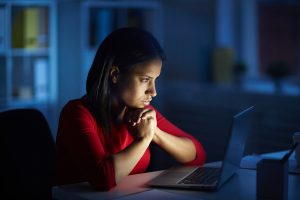 “Being in the presence of light at night disrupts the body’s natural circadian rhythms by suppressing the production of [the sleep hormone known as] melatonin,” according to the report’s author. “But melatonin does far more than help us get sleepy — it’s also an antioxidant that appears to play a pivotal role in slowing the progression of cancer and other diseases.”

According to the American Macular Degeneration Foundation (AMDF), direct exposure to blue light — especially the sort of exposure that results from staring into a computer or TV screen for long stretches of time — can cause severe damage to the retina. What’s worse, the sort of retinal damage that results from blue light exposure can lead to macular degeneration, which will eventually lead to the loss of central vision. That’s a frightening bit of information, without a doubt. Thankfully, there are actions you can take that will significantly decrease the negative health effects of blue light, which seems nearly impossible to avoid in our screen-filled world.

Unfortunately, the vast majority of screen protector films that claim to eliminate blue light are not quite worth the investment. That’s because they only cut down on up to 32% of the blue light emission coming from your display. And they make the screen image look hazy.

NuShield offers the Triple A screen protector film which is designed to fit approximately 15,000 of the most popular devices available today. The film cuts down the glare to reduce eye strain and eliminate reflection. The film uses a light tacky adhesive which sticks to the screen and stays there.

If you can’t find yours in the list, NuShield will work with you to create a film size to fit your display at no extra charge, ensuring a perfect fit for nearly any device. NuShield screen protectors come with a 100% money-back guarantee, so you have nothing to lose.

The other product that will work in tandem with the NuShield film might already be available on your device. On newer devices you can adjust the amount of blue color to “warm” up the image and reduce eye strain.  It is usually located in the Settings area where you adjust your Display. Apple provides its own version of this for iOS called “Night Shift” which can be turned on in the Settings —> Displays and Brightness.

If you do not have this feature on your device there is another option. Here at NuShield, we’re big fans of f.lux, which is free software for Windows, Mac, Linux, and Android mobile devices that allows your device’s display to adapt to the time of day: Warm at night and reminiscent of sunlight during the day.

We’ve been using f.lux on our Windows laptops and monitors for over a year and indeed, the dimming of the display, which occurs slowly and in concert with the daily setting of the sun, does seem to have had a beneficial effect on our sleep patterns. Which is a good thing, especially when you consider that some of the latest research on blue light has found that after exposure to a cold virus, sleep deprived people are much more likely to get sick than those who aren’t sleep deprived.

Here are a few other simple and easy solutions that can immediately help to reduce the effects of the potential damage that can be caused by blue light and ultra-violet light: