Did you know that starting with the car year 2018 the National Highway Traffic Safety Administration (NHTSA) made it mandatory to have backup cameras in all new cars. 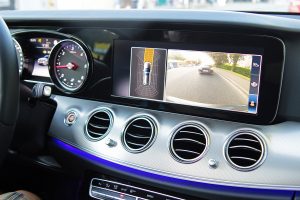 According to NHTSA, standard backup cameras will go a long way toward preventing injury and death, especially among children. Roughly 200 people are killed each year and another 14,000 are injured in so-called backover accidents, when drivers reverse over another person without noticing him or her. The vast majority of the victims are children, largely because their small size makes them hard to see from the driver’s seat.

But glare on these LCD screens will prevent you from seeing the image behind you. This is why NuShield has been offering the Triple A antiglare and DayVue anti-reflective screen protector films and is the only company who has an extensive list of film sizes that fit car displays going back to 2009.

Our engineers spent over six hours at the 2019 New York City Auto Show to take measurements of the camera displays for over 150 cars that were available to the public. These displays now are made of highly polished glass, some of which are mounted above the dash and reflect images during the day, making it hard to see what is on the screen.

The NuShield DayVue screen protector film allows you to read the display in direct sunlight such as in a convertible or if you are wearing polarized sunglasses. And since the film offers 99% clarity, it is just as bright and visible at night or when you don’t wear sunglasses.

The NuShield Triple A screen protector film diffuses glare on the screen in a shaded environment or if you are wearing regular sunglasses. These would be most cars on the road. The Triple A film also hides unsightly fingerprints and makes clean up easy.

Due to some creative designs of these displays that have elevated knobs or buttons on the display NuShield has decided to cover mostly the actual active area of the display instead of making cuts around these obstructions which also would make installation of the film more difficult.

The NuShield films are easy to install and will last a long time. The slightly tacky backing does not damage the display and can easily be removed without leaving residue even after a number of years. We have the most extensive auto models and years listed on our website already, but If we don’t have your specific car model listed, we will work with you to create a film size to fit your display.

You can find a full list of car manufacturers by clicking here.